Rob resides in Reno, Nevada and currently has his own fly fishing travel business, Bucket List Fly Fishing Adventures and is the lead guide and owner of Reno Fly Fishing Outfitters. Although Rob guides all over the Reno-Tahoe area, he has been the #1 guide at Pyramid lake for over 15 years.  He regularly does speaking engagements on Pyramid Lake other Northern Nevada and California waters and numerous “Bucket List” destinations around the world.  Rob is always willing and ready to educate fly fishing enthusiasts.

Rob Anderson grew up in Virginia and was fishing from the time he can remember.  At the age of 9, he learned to fly fish.  From that point on he fly-fished for bass and pan fish in Virginia as much as possible. After college, Rob pursued his other passion, golf, by working in that business for 15 years.  During this time he had headed west and settled in Lake Tahoe.  In 1997, while still working in the golf industry, he was reintroduced to fly fishing by his friend Chris Evison.  Chris taught him the art of fly fishing for trout in moving water.  His love of the sport was reborn!

In his free time from the golf business he regularly visited the Original Reno Fly Shop where he began learning how to tie flies (he is now a Signature Fly Designer for Umpqua Feather Merchants with over 20 patterns tied commercially).  In the fall of 2001, the Reno Fly Shop offered Rob a part-time job which shortly thereafter, turned into a full time position managing the retail store, private waters program and guide business until the Reno Fly Shop closed its doors in 2010. 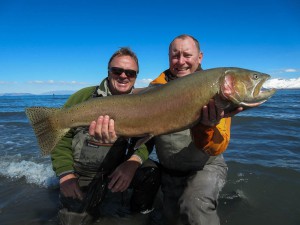 It was in 2003 that Rob pursued his interest in guiding at Pyramid Lake. Rob ultimately became the first non-tribal fly fishing guide at the Lake. Since that time has built a fly fishing specific website for Pyramid Lake and runs the largest and most successful guide service there. Rob’s love of Pyramid Lake has also driven him to design Pyramid-specific flies which have increased the popularity of nymphing at the lake.  Two of these flies are the Maholo Fly and the Maholo Midge.

Rob was able to incorporate his passion for food into the guiding experience through his private waters program and hosting larger group outings and clinics. This unique offering sets guide trips with Rob apart from all others. Rob has several programs designed for larger groups at popular fly fishing destinations like Pyramid Lake and Davis Lake. Lakeside Meals and guided fly fishing for parties of 10 or more are easy.

Whether you are a single angler looking to spend a half day on the water or a larger group looking for a unique fly fishing experience you will never forget, Rob is the man.

Jon’s been fly fishing and tying flies since 1972 and is a California licensed fly fishing guide, published author, educator, innovative tier, and 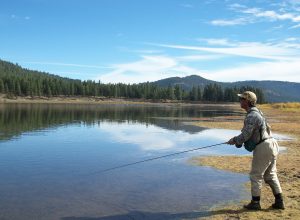 public speaker giving fly fishing presentations to clubs and expos across the state of California. His Dad, Bob Baiocchi, was inducted into the Federation of Fly Fishers Hall of Fame in 1999 and was a major influence in helping Jon hone his fly fishing skills at a very early age. Jon now owns and operates Baiocchi’s Troutfitters guide service In Northern California where he has been guiding for the last 14 years. He has a reputation as a hard working guide that’s been trained by some of fly fishing’s best known anglers. His enthusiasm for the sport is contagious and combined with his simple approach to teaching gives students the skills needed to be successful. Moved by all things flora and fauna his passion for such is never ending. His locations for guiding include Lake Davis, the Wild & Scenic Middle Fork Feather River, Frenchman’s Reservoir, Eagle Lake, the North Fork Yuba River, Lake Almanor, The Big & Little Truckee Rivers, The Lower Yuba, and many secluded creeks in Eastern Plumas Co.  Jon’s philosophy on fly fishing is to keep it simple, be confident in your presentation, and have fun!  His favorite game is stalking and sight fishing to large trout in shallow water whether it is a river or a still water. 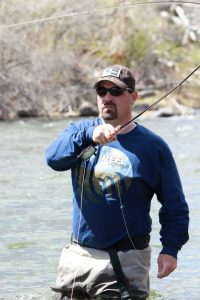 Mike Curtis has been fishing since he could stand on his own two feet. He was raised always fishing and waterfowl hunting–which are now two of his greatest passions in life. Mike’s Guiding career started at Tahoe Fly Fishing Outfitters in South Lake Tahoe and was a key guide there for 7 years. Mike then took on the task of starting a guide service as the head guide of a very small local fly shop. As it became obvious there was not enough work to keep Mike busy, Mike decided to venture out on his own and become a part of our team at the same time. Mike is one of our Truckee River specialists and brings a much-needed addition to our staff of guides. Mike has the skills to work with everybody from first time fisherman to the most experienced anglers.

Being raised in the Tahoe area, Mike knows most of our rivers by heart. His favorite river to guide and fish is the Truckee River. After moving to Reno in the 90’s, Mike has explored almost every inch of the Truckee River and knows it well. On his days off, he loves chasing the big fish in the river or the under rated “Redneck Bonefish” (carp) that are in the local ponds and lakes in Reno. He has contributed to many fly fishing publications such as the Sierra Fly Fisherman Magazine.

Mike has been a part of our team now for three years and has developed into an important part of our local “Stream Team” and also stepped in and helped us get through our busiest Pyramid season ever in which we did over 200 guide days on the lake. Do yourself a favor and spend a day on the water with Mike this summer.