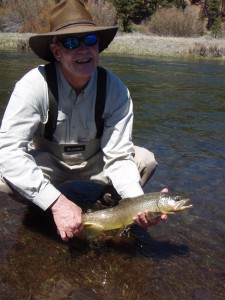 FIshed the LT this morning with 3 guys who took our Intro to Fly Fishing Class yesterday.  They had a great time, learned a bunch and were fun to fish with.  One of the guys caught his first fish on a fly and it was a very respectable 18 – 19″ brown trout. (See photos)  Congratulations Skip!   Saw very few rising fish but there were a fair number actively nymphing in several of the runs we fished.  I took a bug sample with a big seine and the number of Golden Stone nymphs, Green Drake nymphs and aquatic worms was impressive.  Quite a few adult caddis (grey, size 18) flying around in the morning as well.  The fish they landed ate a small San Juan Worm.  Lots of people on the little stream today since the Truckee River is 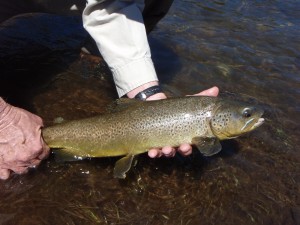 rising due to really warm weather the last 3 days.