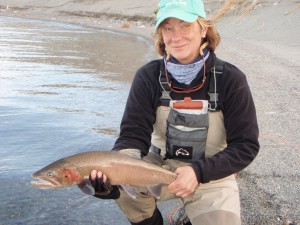 Two of us fished Pyramid for about 3 hours on Tuesday evening and we did well.  We landed five, lost six that we had hooked, missed several other strikes and had fish following the fly on numerous casts.  Fish were all 19″-24″.  When the sun got off the water, the fish moved in very close to the beach.  All of the fish we actually landed were on beetles with a sinking line.  We fished north and south of Blockhouse on beaches that have a steep drop off.